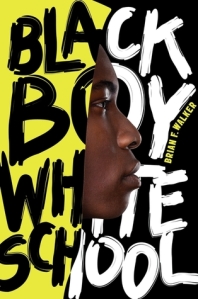 Black Boy White School Written By: Brian F. Walker
He couldn’t listen to music or talk on the phone without her jumping all over him about what they listened to up in Maine, or how they talked up in Maine, or how he better not go up to Maine and start acting ghetto.

Anthony’s mother didn’t even know where it was until he’d shown it to her on a map, but that still didn’t stop her from acting like she was born there.

Anthony “Ant” Jones has never been outside his rough East Cleveland neighborhood when he’s given a scholarship to Belton Academy, an elite prep school in Maine.But at Belton things are far from perfect. Everyone calls him “Tony,” assumes he’s from Brooklyn, expects him to play basketball, and yet acts shocked when he fights back.

As Anthony tries to adapt to a world that will never fully accept him, he’s in for a rude awakening: Home is becoming a place where he no longer belongs.

In debut author Brian F. Walker’s hard-hitting novel about staying true to yourself, Anthony might find a way to survive at Belton, but what will it cost him?