With the recent confusion in the news where it was stated that Santa Claus is white and so is Jesus, I had to laugh and SMH. Please remember to ALWAYS do your own research. I want ALL of my brotha’s and sista’s to KNOW YOUR HISTORY! The TRUTH! Below are some facts about the REAL St.Nicolas.

According to historical records Saint Nicholas was born during the 3rd century in the village of Patara. Patara is now known as the southern coast of Turkey. St. Nicolas was born of very wealthy ethnic black Anatolians of the ancient Roman Empire. He was one of those ancient and dominant black Moors of Europe that you only fleetingly come across in today’s western history, because the Gothic Europeans would hide the true Moorish history in Europe. Saint Nicholas’ wealthy parents, died in an epidemic while Nicholas was still young. Being a devout Christian, he followed the words of Jesus to “sell what you own and give the money to the poor.” Nicholas used his whole inheritance to assist the needy, the sick, and the suffering. He was made the Bishop of Myra while he was still just a young man.The high office of Nicholas at such a young age speaks to dominant role played by Moorish black Anatolians and Africans in creating the church as we know it today. Saint Nicolas was known throughout the land for his generosity to those in need, his love for children, and his concern for sailors and ships. Under the Roman Emperor Diocletian, Bishop Nicholas suffered for his faith, was exiled and imprisoned. After his release, Nicholas attended the Council of Nicaea in AD 325, where he worked with other early fathers of the church to establish the standardized christian doctrine of today. He died December 6, AD 343 in Myra and was buried in his cathedral church, where a unique relic, called manna, formed in his grave. 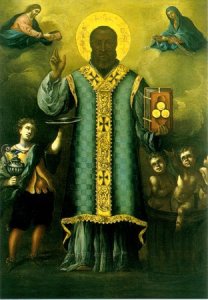