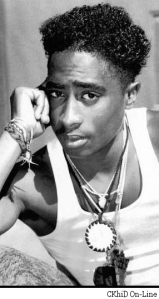 Tupac is one of my favorite artist, and people in general. I love this man’s passion and honesty. He was so intelligent and wise beyond his years. He left me with so much wisdom, I only hope this new generation of youth can appreciate what this man was truly trying to do, not only in Music but in the World!

Tupac Shakur was one of the most dynamic, influential Hip Hop Artist of the Nineties. The rapper’s husky voice described his passion for his community and the people in song’s like “Brenda’s got a baby”(Number 23 R&B), “Keep ya Head up”, “The Good Die Young”, and “Dear Mama”(Number 9 Pop, Number 3 R&B) to name a few. Tupac’s life was short lived when in was killed in Las Vegas on September 13, 1996 at the age of 25, today marks 17 years that Pac has been gone. & to me his body of work left such a Legacy you can still feel his presence in music today.

Tupac was the son of Black Panther Party members Billy Garland and Afeni Shakur. Shakur spent his earliest years in the Bronx and Harlem, and at age 13 made his acting debut in a production of A Raisin in the Sun at an Apollo Theatre benefit for Jesse Jackson’s 1984 presidential campaign. He spent the rest of his childhood moving around the country with his mother. He attended the Baltimore School of the Arts before dropping out and settling, at the age of 17, in Marin County, California.

Later Tupac successfully auditioned to become a dancer and roadie for the rap group Digital Underground and simultaneously worked relentlessly on his own material. He appeared on that group’s This Is an E.P. Release EP (1990) and Sons of the P (1991). In 1991 he signed with Interscope and released the album 2pacalypse Now (Number 64 pop, Number 13 R&B, 1992), a musical mixture of inner-city portraiture and messages of racial strength.

Tupac also became a successful actor in the early 1990s, appearing in Ernest Dickerson’s Juice (1992) and Above the Rim (1994), and giving a critically acclaimed performance opposite Janet Jackson in John Singleton’s Poetic Justice (1993).

Some of Tupac’s Album’s include 2Pacalypse Now, Strickly 4 My N.I.G.G.A.Z, Me against the World, All eyez on me, The Don Killumaniti The 7 Day Theory, Greatest Hits, Better Dayz, R U Still Down, Still I Rise, Until the End of Time, Thug Life Vol. 1, Tupac Ressurection, The Rose That grew from Concrete, Loyal to the Game, Pac’s Life, 2Pac Life, Best of 2Pac, The Prophet Returns, The Rose Vol.2 Beginnings: The Lost Tapes