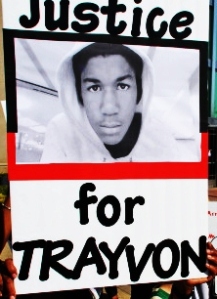 Trayvon Benjamin Martin born February 5th 1995  was the son of Sybrina Fulton and Tracy Martin. He was a high school junior and lived with his mother and older brother in Florida at the time of his untimely death.

On the day Trayvon Martin was fatally shot, he and his father were visiting his father’s friend in The Retreat at Twin Lakes in Sanford, where the shooting occurred.

Trayvon was  fatally shot by George Zimmerman on the night of February 26, 2012. Trayvon was an unarmed 17-year-old African American male walking home from the store after purchasing a bag of skittles and drink.

When I first heard about this story it made me sad because I have a son, he is 7 years old. I couldn’t imagine someone taking his life just because they felt like it. I don’t know if the judicial system will give justice for this horrific crime but I know George Zimmerman will have to answer to a higher power for his actions. I am praying for Trayvon’s family and for George Zimmerman because they both need prayer after this tragic incident.